I think I promised people a blog post about the Barn Owl I cross-stitched for my mother's graduation.
So here it is. 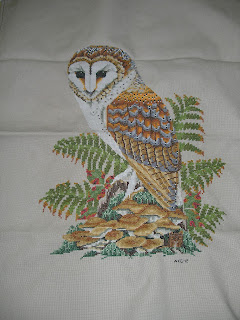 I started stitching this with what I thought would be plenty of time before the graduation. Turns out I was wrong, especially since I was also going to make a cross-stitch sampler of Alpine Flowers for my father (which I at least started) and horses for my sister (which I didn't). 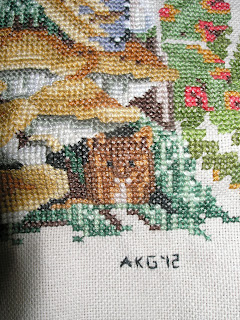 I did take it to Michigan with me for the graduation at which point the owl itself was done, I just needed to add the foliage, the mouse (detail above), and the mushrooms. I almost finished it too. I literally had some grass left to sew the night before we left to drive back to Maryland. I had even bought a frame and matting while I was there. So instead, I dragged the almost finished piece back home with me along with the frame and matting. 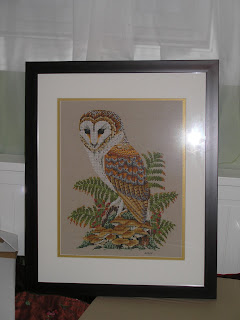 I finished it a few days after we got back and then it sat in my craft room closet for ages. I finally framed it at around midnight the day before my sister-in-law and her husband were due to drive back to Michigan after they came to visit us. It was several months late (as a graduation present), but at least it's no longer a UFO sitting in my craft room.
Posted by Anna at 11:31 PM