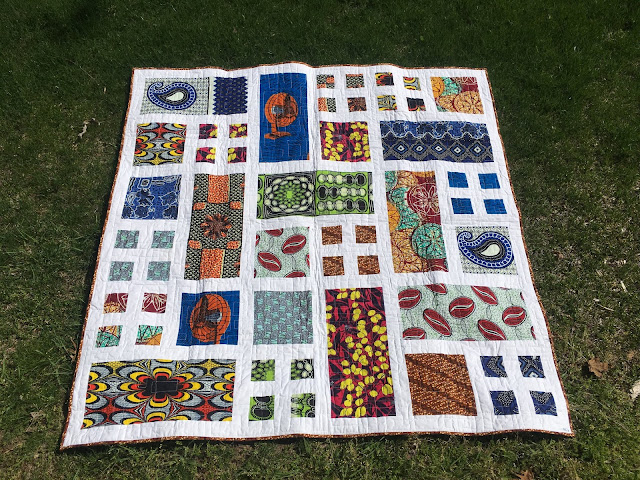 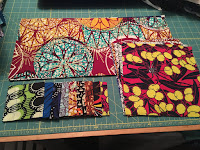 So this all started with an email from the guild passing along a request from a woman in Washington, DC who wanted some quilts made from the fabrics she'd brought back with her from her business trips to Africa and China. I sent an email to the address listed and let her know up front what I charge for this kind of work (supplies, plus $20/hour for labor, plus 10% overhead/profit, with a $150 down payment for supplies), not expecting to hear from her again, because that's been my experience when people are looking for someone to make commission quilts. They just never respond or tell me that's crazy. Much to my surprise, I received an answer and she accepted the quoted amount. So I drafted up a contract, since this was my first commission for a non-family or friend, and we got it all signed. She also sent me the fabrics and I got started. First up, washing and drying to get the excess dyes and wax out and shrink the fabric. The washing really changed the feel of the fabrics, because they were very stiff before. 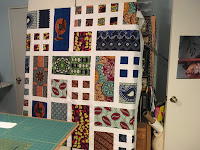 She wanted two quilts made and sent me some pictures of ideas. She was adamant about this pattern being one of the quilts, and unfortunately even after doing an internet search, I still don't know where the pattern came from. So if anyone knows, I'd love to give credit to whoever came up with the original. I would have had to resize regardless, so I drafted the pattern in EQ7, knowing I needed a lap size quilt, and with the intention of keeping the large rectangles as big as possible to show off the fabric to full advantage. I think I may have even measured those fans to see how big they needed to be to get the whole thing on there. I also wanted to make sure that every fabric she sent me was represented in the quilt, except for the panel she'd gotten from China. 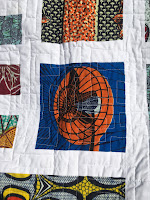 I fussy cut, where possible and tried to get the non-blue fabrics over the blue ones, because I was planning a blue and white quilt for the second one (more on that in the next post). I used Kona White for the sashing, because I wanted the colors to really pop and there were too many dark fabrics to consider black as an option. I got the top put together fairly quickly, once all the cutting was done. I do wish I'd maybe interfaced one or two of the loosest fabrics, because they stretched a bit when trying to sew the lengths together, but otherwise the fabrics held up pretty well. I kept updating her with pictures and got her go-ahead on the quilting pattern I wanted to use. My go-to for square quilts: free-motion boxes. Which I think turned out really well and only took me two or three hours. I bound it in the dark brown fabric that she had provided, because it gave the most contrast and also had the best hand for cutting into thinner strips. 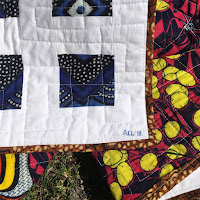 It only took me about a year longer than initially agreed upon to get these quilts done for a variety of reasons, but luckily I had a very understanding client. She just wanted the quilts and loved the end result. This was my first quilt finish in 2018, but was quickly followed by numbers two through six. I'd more or less had quilter's block that entire year, plus an infant, moving, watching kids full time and so on. I'm really happy it's done, it's beautiful, and I got paid for it. Not that I want to do a ton of commissions, but every once in a while getting paid to do what I love, as long as it's fair compensation in my book and not a low-ball offer, is nice. So here you go, the first of the two commission quilts. Second one to follow soon. 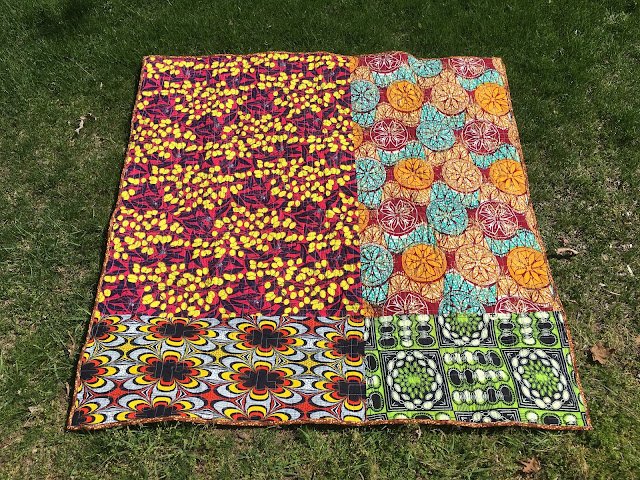 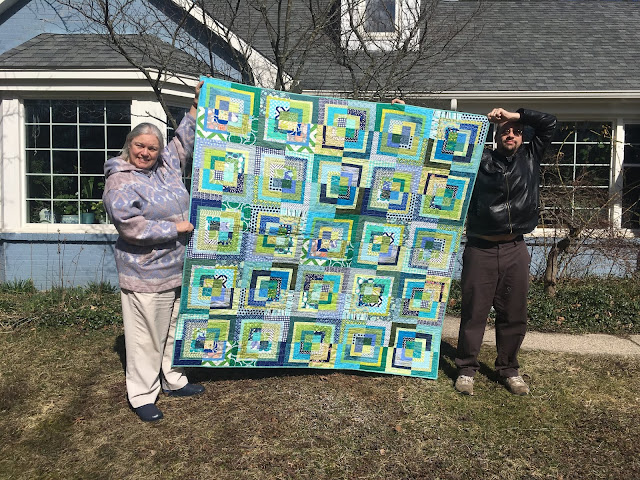 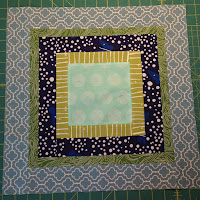 So my mom told me she wanted a quilt (a while ago). Said she didn't care when she got it, but she wanted one. As I was at least willing to entertain the notion, I asked her what colors: blue and green. I even sat down and showed her some pictures of fabrics in my stash and we came to the conclusion that she didn't want any fabrics with people, animals, or buildings on them. Primarily geometric with some butterflies and seashells mixed in. I had been wanting to give Film in the Fridge's Modified Bento Box tutorial a try for some time, ever since I had to make a block for someone in a bee, and decided that this might be the perfect opportunity. I was participating in the Stash Bee at the time (2014), so I wrote up a block tutorial based on Film in the Fridge's original. I don't remember, but I feel like I also asked for the same block from another bee, but it's been a while and I honestly don't remember. 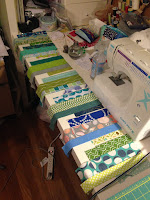 Then the blocks sat and sat and sat, because I knew I wanted the quilt to be a decent size and I was missing a few blocks. Plus I had other quilts I wanted to get done. But I finally got my butt in gear, figured out how many blocks I still needed, did a quick fabric pull, and then chain pieced those suckers. The blocks are supposed to finish at 16" square, and I had deliberately asked people to leave them at whatever size they finished, so I could make decisions on final size later. Since some of the bee blocks turned out a bit crooked, when I cut them into quarters, I ended up with some warped edges. Which is why I decided to cut down the center as well, so I'd have consistent center sizes and at least one matching seam per block. Thank goodness for a sewing day with a fellow quilter, or that process may have gotten overwhelming. I believe I ended up somewhere in the range of a 14" block or so, after cutting down and reassembling. 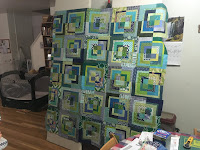 The only thing I really cared about was that the same fabric didn't end up next to each other, which wasn't a huge problem, because only a few of the blocks were made by the same people and had the same fabrics repeated. And then it took a while for me to arrange the blocks on my design wall to my satisfaction so the quarters weren't too close to each other. I did the arranging and sewed the top together during one of the trips my husband took with our son, when I was home alone and didn't have to worry about the little monster angel pulling blocks off my design wall. Then the quilt sat again, because I didn't have a back for it. 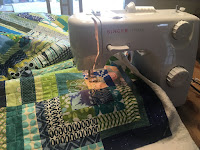 Enter one of our quilting retreats for the DC Modern Quilt Guild. I brought the fabrics I had bought, scaled up the modified bento box pattern to 70" squared and pieced the back (I'm rather proud of that one, tyvm). It took some piecing of strips, because I didn't have long enough lengths, and also some piecing due to cutting mistakes, but I really like the final result. I think I basted it at the retreat as well, but I don't remember, and maybe even started quilting it with the box free motion quilting pattern that I really enjoy. Then it sat again. And sat. I was trying to focus on my commission quilts, but they were just giving me quilters block. So on one of our trips to Michigan in 2017, I decided to bring this quilt with, plus the binding fabric, and see if I could finish it. 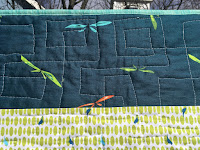 What I didn't bring... my beautiful Juki work horse. I figured I'd be able to use my mom's (old, solid) Singer or Pfaff, but neither had a free motion quilting foot. So I ended up borrowing my sister's small (cheap, plastic) Singer. It got the job done, but boy what a difference in quality of stitching and shakiness of the box sides. I also got the binding made and attached, though I forgot to embroider my initials and the date, because I figured I would see it again at some point. I got it done the day before or the day we were supposed to drive back home to Maryland, so ended up doing a quick photo shoot with my mom and my hubby of the final quilt. I'm quite happy with how it turned out. And recently it finally saw some use, after sitting folded at the end of my parents' bed, when I used it to cover up my sick son (which also meant it's first wash afterwards, which left it nicely crinkled). I think I like it so much because blue and green is my favorite color combo as well, and what I chose for my son's room. So I'm seeing another blue and green quilt in my future for his big boy bed at some point. 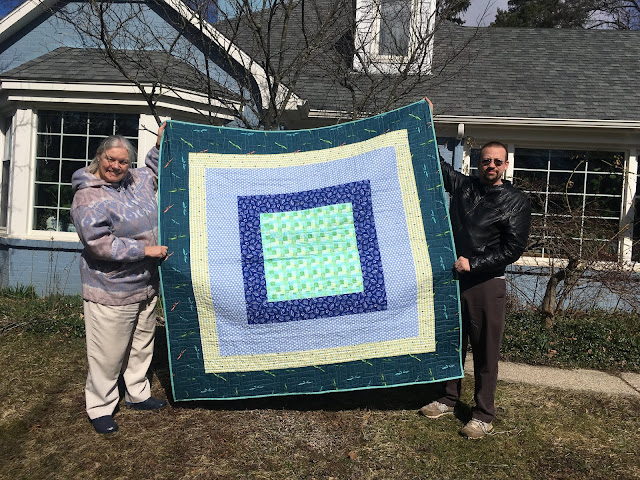