So with the new house, I have an official craftroom that our cat is not allowed in. It's painted a beautiful green, and all of the stuff in the room is white or natural wood (pictures to come). But there's still something missing. Right now I'm working on a rickety brown card table until we have the time, energy, and money to buy the white shelf/desk set and 2-drawer white filing cabinet that I've had my eye on at IKEA for a while now.

But even when I can envision that furniture in the space, there's just something missing. Part of it is the perpetually closed door, the lack of a cute kitty following me wherever I go, the fact that it's the coldest room upstairs, and it kind of echoes. I really think I need a nice plush rug on the floor (I'm thinking green, maybe something like the one on the right). Maybe I need some pictures on the walls, maybe I just need another spot of color (I'm thinking lavender or red). Whatever it is, I currently avoid that room like it's my job, and that's sad considering I've wanted a craft room for ages. I'm hoping finally having the shelf and desk in there will help, but who knows. My husband thinks it's silly that I'm not using the room I was so excited about when we moved in. But I just can't explain to him what's bugging me until I figure it out for myself. 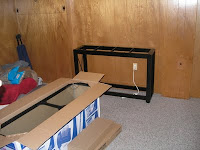 So at the end of June, we decided that one of the walls in the Man Cave (basement) really needed something. We weren't quite sure what that something was, but we knew it needed it. On one of our many trips out to College Park, to go to IKEA, I looked up a PetCo. My intent was to get some better dry food for my cat, but what we ended up doing there was figuring out exactly what that empty wall needed... an aquarium. 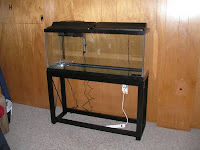 Both Eric and I have had aquariums in the past. I had a 25 gallon freshwater tank while we lived in Spain with several fun, peaceful tropical fish, as well as freshwater shrimp, and snails (with live plants). Eric had a 10 or 20 gallon tank with a Tiger Oscar that he fed live goldfish. We decided we wanted to go as big as our budget allowed. So we ended up getting a 55 gallon aquarium kit over the 4th of July weekend. 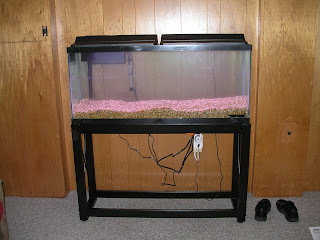 We set up the stand and aquarium, filled it with 110 lbs. of gravel and filled it with water (by dragging the garden hose through the basement and into the house). We also set up the filter, rigged an ingenious way of making it almost soundless (this involved two pieces of sponge stuck into the intake zone), the thermometer, and a timer for the two hood lights. Because we have a cat, we decided a hood was a definite necessity, even though he hasn't bothered to try and jump up on top of it yet. 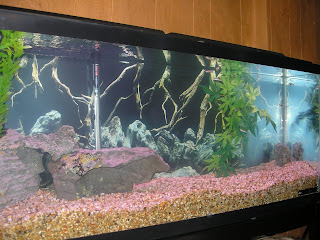 We let it run from Friday until Sunday, and brought the water to a speciality aquarium store in Rockville, MD to get tested.  Since everything checked out, we came home with two fake plants, a huge log, four rocks, a backdrop, and a bag of 12 Zebra Danios. We put the log to soak in our bathtub for a day and a half, to try and make it less boyant (weighing it down with a can of paint). In the meantime we set up the rocks and plants and introduced the Danios to our pristine new tank. 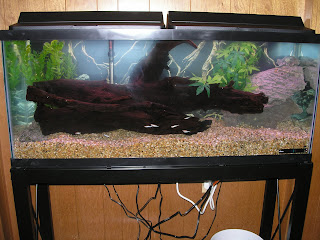 We were going for a blackwater Amazonian river, but the guys at the aquarium shop got it wrong when they suggested Danios (which are from India). We finally added the log, which dominates the tank completely, and that forced us to move around the rocks. A few weeks later we lost our first Danio, another one mysteriously disappeared that same week, and we added a Rubberlip Plecostomus (an algae eater). Unfortunately, we didn't wait long enough and there was barely any algae in the tank yet, so the poor thing croaked on us 8 days later.
The algae is finally starting to take hold now though, and I'm hoping we'll be able to try for another plecos sometime soon. My end goal is to have at least one or two more swarms of small fish (we're talking neon or cardinal tetras and possibly something else), 2 plecos, and 2-3 South American dwarf cichlids. But we'll probably let the tank cycle for another week or two before we attempt any of that. And even though Eric is opposed to live plants, I think they really add something to the tank that the fake plants just can't.
Posted by Anna at 1:22 PM 2 comments:

I had the opportunity to see The Help yesterday and I must say, it is one of the best and most powerful movies in a long time. The movie is based on a book (which I must admit, I have not read), and is set in Civil Rights era Jackson, Mississippi. The three main characters are Skeeter, a privileged white girl who was raised by the family's black maid, Constantine; Aibileen, a black maid, who works for one of Skeeter's childhood friends; and Minny, a second black maid, who was fired by another one of Skeeter's childhood friends. The general themes throughout the movie are friendship, racism, and the courage to make a difference. Woven throughout the movie are moments you learned about in the history books (the prevalence of Jim Crow in every day life, some powerful speeches by various civil rights leaders, the murder of Emmett Till, Kennedy's assassination, etc.), but you see these moments through the eyes of "small town" people.
The movie is not only powerful but has its funny parts as well. So funny that half of the theater was practically rolling in the aisles with laughter. But there were also moments that brought tears to my eyes, parts where the whole theater gasped in disbelief and outrage. But perhaps the most interesting part was that I heard several young African-American women who had been sitting behind me talk about how glad they were that they were born in 1985. I don't blame them, I'm glad I was born in 1985 too. I would whole heartedly recommend that you go see this film. The acting and story are amazing.
Posted by Anna at 1:00 PM 1 comment: