I did not finish out Declutter Like a Mother as planned, but it just seemed a little impossible to keep up at that late stage of my pregnancy. However, I did continue to declutter a little here, a little there. Mainly, I've been pulling books off my laden bookshelves that I either have in duplicate (this has mainly been an issue with the children's books, and not too many of those), ones that I have started and know I have no interest in finishing, ones that I have not even started reading and know I probably never will, ones I have read but just weren't good enough to re-read or keep for my kiddos/hubby to read, and old textbooks that I kept as "reference materials" but haven't touched since college (I'm actually having the most problems with this category).

So far, I have managed to put all my favorite books properly on their shelves, because I've cleaned out the stuff around them. I have also managed to free up an entire second shelf for our children's books, so they are no longer stuffed into one shelf. That has made a big difference in how often they end up on the floor, because although my kiddo still occasionally pulls out an entire shelf full of books, he's yet to do both at once, and each shelf only has about half the books.

Yesterday I went through our tablecloths and sorted out all the ones we've never used and don't plan to use (round ones, even though we got rid of our round table, and a few of the square ones that just never got pulled out). I put the rest back and they all fit neatly in their shelf. I also got rid of the silk napkins that just don't soak up any liquids and kept just the good cloth ones that do a much better job. 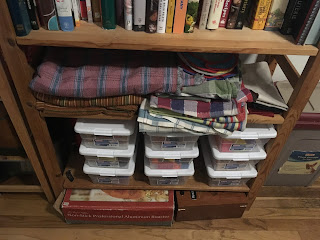 I've also been slowly sorting through my paperwork, getting rid of everything I can, taking pictures of stuff I've held onto for scrapbooking purposes, and then I'll figure out how to file/sort the rest once I've whittled it down more. I also desperately need a new shredder. My son managed to break mine somehow. It only goes in reverse, which is pretty worthless for actually shredding anything.
Posted by Anna at 9:49 PM 1 comment: 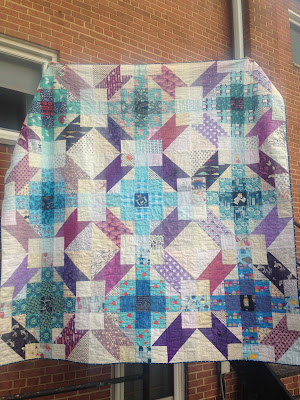 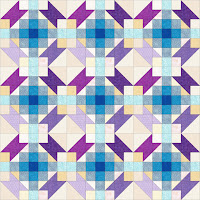 So this quilt started out as part of my DCMQG 2016 QAL (which will get finished at some point, when I'm not wrangling a newborn). I loved this particular variation on Block 7 so much, that I wanted to turn it into a quilt. So when one of my best friends, and college room mate, told me she'd gotten some bad news about her health, I decided to make a quilt for her to cheer her up and wrap her in some love, like quilters tend to do. I asked her what her favorite colors were, and the answer was blue and purple. So I pulled every fabric scrap I had in those colors, plus my low volumes, and proceeded to bang out 9 28" blocks, while my hubby and son were visiting family in Michigan. 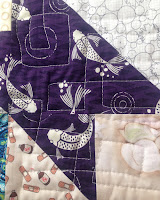 The very center square is black and all the other center squares are a dark blue. I guess there's supposed to be some symbolism there about coming out of darkness and what not. I spent some time arranging the various pieces to my satisfaction and then also spent some time moving around the finished blocks. I had bought a bunch of purple backing, because I was making this quilt and another quilt (post coming soon), and both were blue and purple. And because I was trying to finish this quilt rather quickly, I also just wanted something easy. For the quilting, I did a free motion box-in-box pattern, which is more "boxy" in parts than in others. The benefits of the pattern are that its fast and I don't really have to worry about accidentally running over already quilted portions, because I just turn it into yet another box. 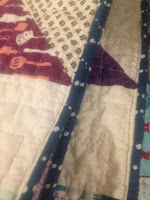 For the binding I used some of the leftover blue bike path fabric from Eric's Pixel Michigan quilt. I machine bound it, because well, it's faster and I hate hand binding. Generally by the time I get to the binding, I just want to be done already and get the quilt out of my house (or on my bed). One load of laundry and lots of Shout color catchers later, and I had a finished, folded quilt to gift to my friend. All told, this quilt took me just under two weeks. I finished it right before my guild's March 2016 quilting retreat. 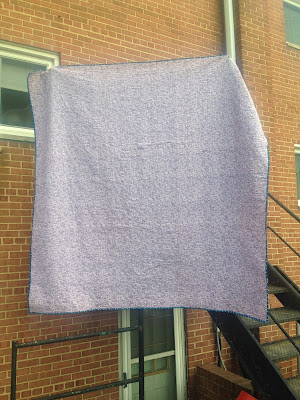