Minimizing Board Games and DVDs

So I recently decided to tackle our 2 DVD shelves' worth of DVDs and the crazy amount of nearly empty board game boxes we have at our house. This has become extra important, since we made the decision to move back to the Midwest at the end of the month. And I only booked a 16' truck, for a 2 bedroom house with basement (I refuse to believe that that's not enough).

In the interest of fitting into said truck, I've had to make some decisions. One, get rid of the dining room table and chairs. They are falling apart anyway and the table is too big for the space. Really sort through my books. So far I've dropped off 1 large laundry basket full for donation, have a second almost full, and plenty more behind that. Get rid of our daybed and get a pull out couch for guests once we find a place to live, potentially get rid of our current couch as well.

I bought a 300+ DVD binder from CaseLogic and ruthlessly purged the cases and the paper covers. The only thing I kept were the actual discs and any inserts. The inserts I put in the front of the case, the DVDs I organized roughly by letter and made myself a list in OneNote of what we have in there. The only ones I didn't get rid of were the collector's edition extended version LOTR discs, since they are super pretty to look at and there are three of them. I also got rid of the rest of our TV shows by consolidating the TV Show DVD binder we already had and sticking the last two seasons that didn't fit in with the movies until such time as I can order another binder. We had an entire large recycling container full of DVD cases when I was done, and two empty shelves. The only other DVDs that were spared (for now) were my hubby's Disney movies (yes, my hubby's, not my kids') until such time as he decides what he'd like to do with them. His options are 1) keep them as is (luckily there aren't that many of them), 2) put them in the Movies binder, or 3) get a smaller binder just for the Disney movies. I'm kind of liking this option for those.

That brings me to today's project. My BitBox arrived in time! With 8-12 days shipping, I was a little worried it wouldn't arrive before our move. The BitBox is a heavy, cardboard box with 4 drawers that have 1 medium and 2 small boxes each, and 2 board/instruction sleeves. It's supposed to fit in one compartment of one of those cube shelves. 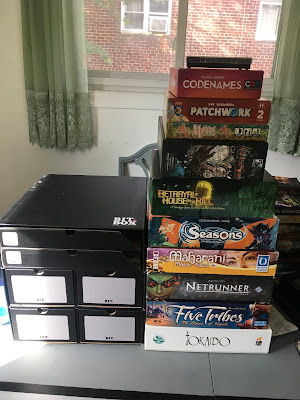 I went through our collection of board games and sorted out those games that I knew we would want to keep forever (anything we might want to sell down the road stays in its box) and that also had a massive amount of wasted space in the box.


Here is what fit in the box:
That was a total of 12 games! And our recycling bin is once again overflowing with boxes and plastic box inserts.
I took pictures of all the boxes and if the front didn't have the age, number of players, and playing time, I took a picture of that as well. My plan is to eventually make stickers for the front of the drawers with the covers on them and for the tops of the boxes with the cover and playing info on them.
Overall, I'm quite pleased with the progress I've made thus far on both the decluttering and minimizing the space the items we do want to keep actually take up.
Posted by Anna at 9:40 PM 2 comments: