Craft Room - Complete and in Use 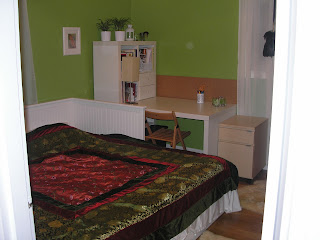 So, I worked to complete my craft room from the moment we moved in, but it ended up taking a lot longer to complete than anticipated (almost five months). I still don't think it's quite done yet, I would love a row of white boards above my cork boards, but it is functional. My sewing machine and crafting supplies are hidden in the shelves to the back left and right, the closet, and the two-drawer filing cabinet usually tucket between the bed and white shelf as an end-table for guests (in the picture at the top you can see it next to the desk because I had to move the bed more into the center of the room). 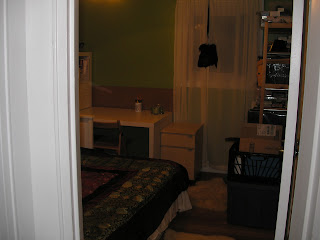 The bed folds from a twin daybed into a king sized bed for guests. My parents tried it out in October and loved it. I was a little worried that it wouldn't be comfortable when pulled out, because the mattresses are a bit on the thin side, but apparently that was not a problem. We've also had several people crash overnight. So it definitely serves its purpose as a guest room admirably.

As for crafting, I have started several sewing projects in there to date. The first of which was a new pair of pajama pants for my DH, which he loves! I'm currently working on a crib quilt for a friend of mine (pictures of that to follow in the next few days, because I need an opinion on how to finish the edging around the jungle animals.)
Posted by Anna at 4:09 PM 1 comment:

﻿﻿
My Christmas Present from my DH this year was a new kitten. He was very secretive leading up to Christmas, not even telling me what time the store was open, and on Christmas Eve telling me that someon would be coming over to help him set up the present, but he couldn't tell me who.


He made me sit on the bed in my craft room with my eyes closed and told me to hold out my hands. Then he proceeded to search the room because he couldn't find the little guy. He finally managed to put the little bundle of fur into my hands. I've been talking about a second cat (well, kitten, because I managed to miss that phase with our big sweetie) for months (possibly years). The deal was that DH would get his dog, before I could get my second cat, but DH started a new job in July that's a lot more demanding, both in terms of time and effort, so a dog just hasn't been an option.

The little guy came with the name Spike, but we decided to rename him, and he's now Merlin (due to his little disappearing act that first day, and multiple others in the days to follow). This continues our Arthurian legend trend, started with Sir Galahad (Sir).

The first few days were also pretty tense between the little guy and our big guy. But it soon turned out that behind all the hissing and growling that Sir was doing, was a big ole scardy cat. Even several weeks later, if both guys are in bed with me, and Merlin gets too close to him, Sir will lick his head, then hiss at him, and jump off the bed. I'm hoping this will pass.

Merlin is a bit clingy as far as cats go, perhaps because he was a stray rescue. When I'm at home, he'll follow me around the whole time. And when I pick him up, as long as he's tired, he'll go right to sleep in my arms. I wouldn't change my two boys for the world.