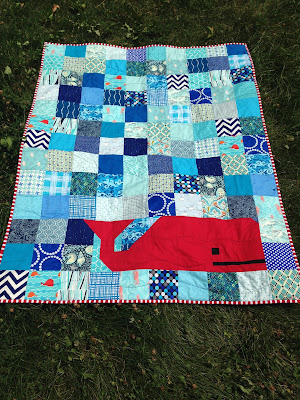 Final Stats
Name: Whale Baby Quilt
Dimensions: 40"x52"
Pieces: Front - about 152
Pattern: My own, based on Elizabeth Hartman's Preppy the Whale
Technique: Patchwork
Materials: 100% Quilting Cottons - Kona Cotton and many prints from my stash
Quilting: Machine quilted on my EuroPro 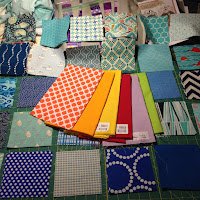 As per usual, I started this journey by asking my friends what their plans were for their nursery. They informed me that they would be doing a nautical theme once their kid was old enough to be transferred to his nursery, so I decided to go with that. I pulled all of my blue fabric that I thought would work, so pretty much anything that had a water or geometric pattern and wasn't anything that would be found on land, like flowers. I bought the Preppy the Whale pattern from Elizabeth Hartman's online shop and did some major quilty math to blow it up to twice the size and then break it down into 4.5" blocks so I could continue the square background around the whale. 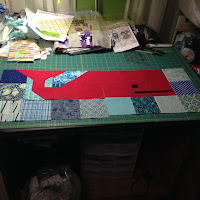 Once that was done, I plugged it all into my EQ7 and came up with the size I wanted for the quilt to determine how many background squares I would need to cut and to make sure I liked the placement of the whale. Once that was done, I cut the 4.5" background squares and then auditioned several colors for the whale and ended up getting some input from my friend as to which one she liked best. I cut out the pieces for the whale and then cut the background pieces that went around the whale. I sewed the whale first and was very relieved when the math all worked out and my whale looked right. The rest of the quilt top was quite easy and quick to put together. 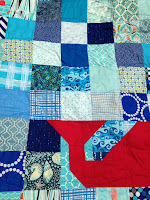 I decided to go with a pieced back, because laziness (i.e. not wanting to take the time to match the pattern), and cut some 5x10" pieces from several of the fabrics I had used on the front to put in between the panels of blue bike path. I basted the quilt during a DCMQG sewing day and quilted it at the same meeting using my walking foot and some very loose wavy lines to indicate water currents or waves. I had brought some more red solid for the binding, but figured out halfway through making the binding that I wasn't going to have nearly enough for the quilt. I thought about my options and thought that I might have enough red and white striped binding at home to use, but that ended up not being the case either. So I bit the bullet and went online to try and find some. 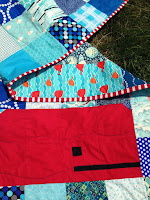 My search was more difficult than I thought, especially since I couldn't quite picture how large the stripes would be on most of them. I ended up finding a 1/4" stripe and bought a half yard of that. When it finally came it was a touch bigger than I was hoping for, but worked just fine anyway. It definitely gave it that nautical feel that I was looking for and complimented the red whale quite nicely. I finished the quilt with my initials and the year embroidered in the lower right hand corner, as I usually do. I know I should probably be making slightly more elaborate quilt labels with my full name and the place where I made the quilt and such for future quilt researchers, but I'm just not that dedicated. 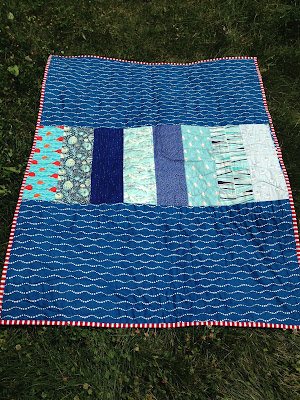