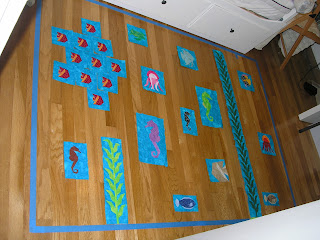 I taped off a section of my craft room floor in the general dimensions that I wanted the quilt in and then arranged the blocks until I was satisfied. In the process I realized that I needed one more seahorse, the little black and white one. 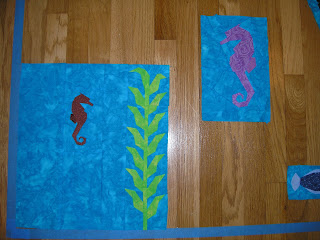 Then I started with the measuring and "log cabin" style piecing. 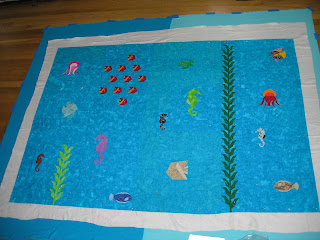 Finally got the top done, which took an eon and was boring beyond belief. I sewed together the two pieces of flannel for the backing although I had originally intended to do something fun with scalloped edges I figured out that I barely had enough, so just went with a straight seam.

To baste it, I had to lock my cats in the basement and the dog in her crate and sweep and vaccuum the downstairs so I'd have an area big enough to lay everything out. It worked just fine and I used every single one of my basting pins. 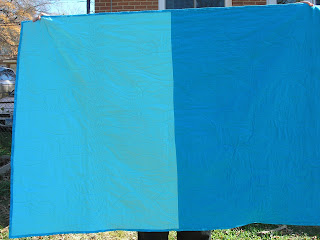 I tried my hand at free-motion quilting to outline the seaweed and sea life, which didn't work as well as I had hoped it would. Then I switched to my new walking foot and quilting wavy lines from one side to the other in varying intervals. I really loved the way the walking foot kept everything straight. I only had one small pucker on the back. I machine sewed the binding onto the quilt, another first. That worked out reasonably well, although I think I prefer the clean look of the hand-binding. But this was so much faster, so I'll likely use it again at some point. But maybe this time I'll just sew the binding from the back, not the front.

And here it is, the finished quilt. 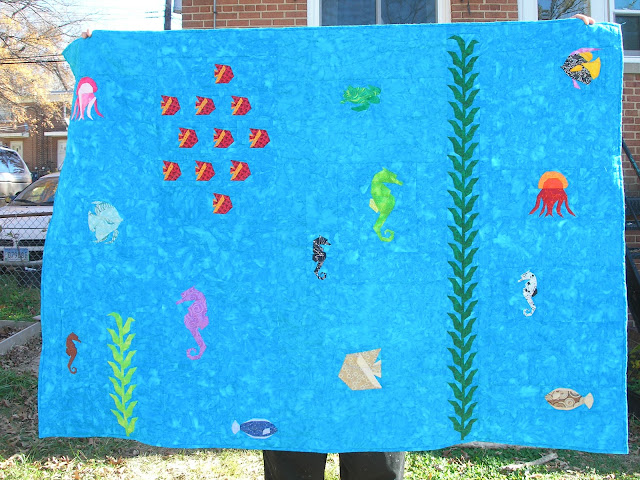 My mother-in-law loves it. I'm really happy with how it turned out as well, but I am never sewing that much seaweed ever again.
Posted by Anna at 1:56 AM