I have an amazing mother-in-law, aren't you just jealous! Unfortunately, her life has not been all rainbows and unicorns lately, since she is going through some really tough times health-wise. That's right, the big C. She's a strong woman and she's going to get through this, but it hasn't been easy thus far. She's on her last round of chemo, and I thought that all of those hospital visits must be a little depressing and decided that she deserved something fun and colorful that she could take with her to the chemo sessions. She loves seahorses, so after doing a test run with some fabric scraps, I decided to go for it.

I'm breaking this into a few pieces, since the individual blocks really need to be seen close-up to really appreciate the work that went into this quilt. It's only fair, I'd have been revealing these block by block if I'd been showing you the pictures during the process. This way you get them in two or three sittings. 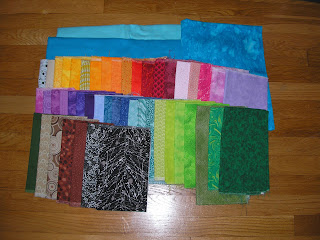 So, once again, the fabric. I got a whole bunch of fat quarters in a rainbow of colors for the ocean life. I also pulled some of my existing fabric into the mix. The turquoise batik served as the background fabric (I ended up with a total of 8 yards of that before I was done, but made the mistake of buying it in three trips, so the last batch is darker than the rest, lesson learned). The two blues in the top left are two panels of flannel I bought for the backing. 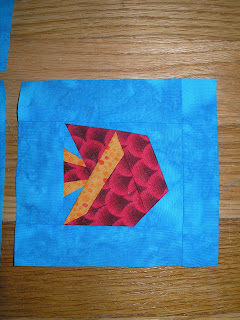 Next up, since I'd made a practice seahorse, I wanted to start on something else. Unfortunatley I have no clue who the credit for this pattern should go to, since I recreated it from a block I found on the internet. I decided to chain sew 11 little fish. In order to expedite the process I actually cut the fabric to size with plenty of spare. I'm really glad I did that, because I ended up realizing very quickly that I had forgotten to cut the red fabric upside down and the scale pattern was pointed the wrong way. Luckily all the extra fabric I had left on the pieces made for a little less swearing since I managed to turn almost all the pieces so the scales pointed the right way. 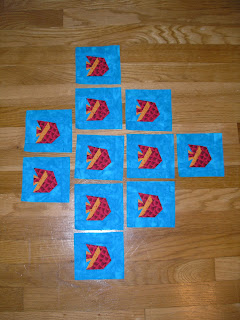 Here are all 11, although I went with a different final configuration. 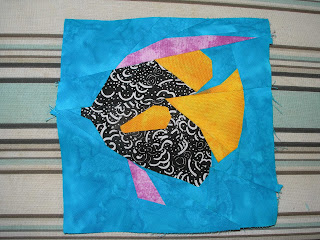 I found an Angelfish pattern here and bought it. However, Angelfish are freshwater/brackish water fish. So I looked online until I found something called a Banner Fish. The colors are not the same, since I was going for as colorful as possible, but the general outline is there. I made one bottom fin instead of two long ones. 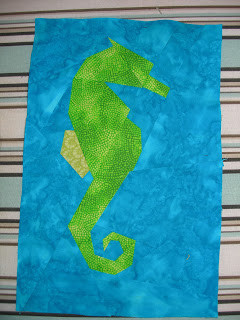 I had to show you at least one seahorse. This is another pattern I recreated from a finished block I found on the internet, so I cannot give credit where it is due, but this is not my original pattern. I decided to do the fins of the seahorses in a different shade than the rest of the body. I really liked this color combo. 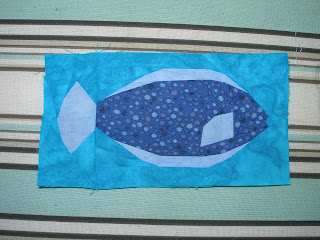 This Brill Fish pattern also came from equiltpatterns.com. All of those fin pieces were a little crazy, but overall it's not hard. I think that's good for now. Hope you enjoyed my first installment of crazy colorful sea life. More to come.﻿
Posted by Anna at 9:05 PM