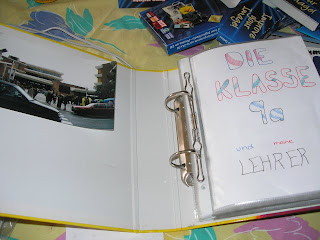 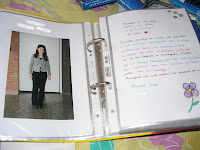 A Poesie Album is basically the German equivalent of a Yearbook. Usually kids have a single blank book that they pass around amongst their friends, who then get one or more pages to write little sayings and well-wishes, draw something, and add stickers, pictures, and anything else they feel like. It serves as a cute little reminder of your childhood friends. 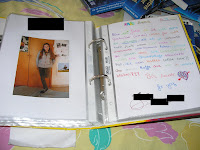 In this case, I had several constraints. I knew I would be moving from Spain to the USA in a couple weeks time, so passing around one single book became impossible. I also wanted to keep things uniform, so I couldn't just ask other people to bring in a page for me. My solution was to take a small binder, fill it with clear protective sleeves, and cut whole pieces of paper into halves. These halves I passed out to all of my class mates, friends, and even teachers and told them I needed them back within the next week. This worked surprisingly well for the younger crowd, but I never received ones at all from some of my teachers. 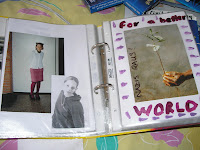 I also brought a camera to school one day, and asked all of my classmates to step outside one at a time, so I could take their pictures. Again, there was very little protest about this, although I did have one classmate, who promised to bring in an extra picture if I would only wait one day before taking her picture. Apparently, she felt that she just didn't look cute enough that day. Some of my teachers also protested being put against a white wall, and chose instead to pose with some of the items that best represented their subject matter. 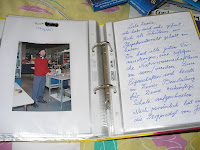 I slipped the finished pages into the right side of the sleeves as I received them. On the left side I wrote people's names at the top of the page so I wouldn't get confused when it came time to put the pictures in the corresponding places. I also made a cover page for the front of the album, entitled "The Class 9a and my Teachers." Once I got my pictures developed (yes, I was still using actual film at the time), I glued them in on the left hand side using photo corners. I was incredibly happy with the amount of work some people put into it, and the sentiments they had to share with me. And I like to pull it out every once in a while and skim through it, remembering the great times I had in Spain.
Posted by Anna at 5:22 PM