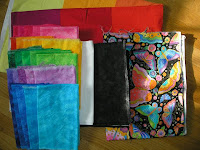 My friends seem to be having babies one after the other right now. As soon as I was done with the Jungle Crib Quilt (from my last post), I moved onto a Circles Crib Quilt. I got the pattern out of Baby & Kids Quilts (Dots for Tiny Tots by Sharon Smith), but put my own twist on it with the color combinations I chose. 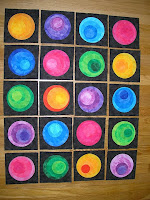 The whole design reminded me of bull's eyes. And I knew that my friend's only firm decisions about her nursery at the time, was that they would hang up maps and possibly letters. Since maps are usually in nice bright colors, I decided to go with that as well. I bought the varigated color sets from Joann's Fabric in blues, oranges/yellows, greens, purples, and pinks. Each set comes in five colors organized from lightest to darkest (1, 2, 3, 4, 5). I decided to use each color combination four times, which left me with the following sets from smallest circle to largest: 1234, 2345, 5432, 4321. That is a total of 80 circles that I cut out from fusible backing, fabric, sewed, and quilted around. 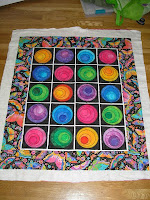 Another friend helped me find the backing fabric and also pointed me in the direction of the psychedelic butterfly fabric I ended up buying for the border. After setting the blocks into white sashing, I added the border. After pin basting the quilt sandwich I started quilting. The instructions said to quilt along all of the sashing, but I decided the circles were close enough together that quilting around them would be plenty. Trying to sew decreasing sizes of circles with a regular foot was difficult. I finally found a free-motion foot for my machine and the little plate that covers the walking feet, so next time I get the hare-brained idea to quilt around 80 circles, I'll have the proper tools to do so. 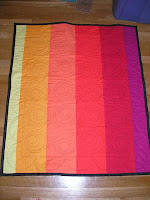 For the border, I bought a half circle cutting template and used it to draw half circles along the border on all four sides in tailor's chalk pencil and 3/4 circles at the corners. I also sewed along the outside border of the sashing strips. Finally I added the black binding, cut from the same fabric as the background of the squares. On the right, you can see the finished back with the black quilting showing. I really love how colorful the fabric is, and it pulls in the oranges from the front and adds a touch of red which seemed to be missing from the front. The quilt was well received at the baby shower.
Posted by Anna at 11:33 AM