I am happy to report that I have actually finished not one but two projects. The first was a barn owl cross-stitch for my mother (perhaps I will have the time and patience to do a post on that with pictures in the near future). The second was a crib quilt with a jungle motif for friends of ours who were having a baby of indeterminate gender (as in, the parents didn't want to know before the birth).

The first hurdle was getting DH to agree that I absolutely needed more crafting supplies and that I was actually going to finish this one. The second was overcoming my own fears that I wouldn't finish it. I had never finished a quilt except a tiny little doll quilt when I was taking a sewing class. So I figured a baby quilt was the place to start. I found an applique pattern I liked in a library book and set to work.
﻿﻿ 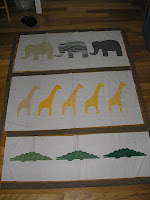 My first issue came up because I wasn't sure which stitch to use around the outside of the animals. I was relatively sure that I did NOT want to hand-stitch the whole thing, but my sewing machine didn't have the stitch the book recommended. So I experimented with different stitches and different widths and lengths until I settled on a loose satin stitch. Not the really tight satin stitch that most machine appliquers use, because I really didn't want that look for this quilt, but something that looked artsy. I did the animals first because they were relatively easy to do. Then I started the laborious process of adding on the "branches" in between the white strips and the 72 leaves. 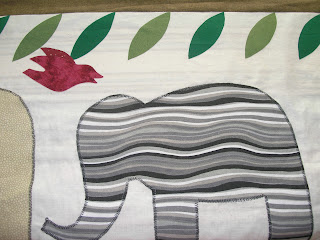 I also added the two little birds to the top and bottom panels. All of this went fine, faster than I could have hoped for, actually. Even with having to individually stitch around 72 leaves. But the part I was dreading most still lay ahead. The little doll quilt I had made, was hand-tied. No actual quilting, certainly not machine quilting. So I was rather apprehensive about the whole process. I'm also a perfectionist, so I knew that any bulges in the backing fabric would drive me nuts. 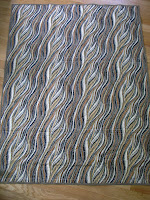 Making the quilt sandwich and pining proved to be one of the most time consuming processes (see perfectionist comment above). Even after I had pinned it I was not entirely happy with how bulgy the back was in places. But I started quilting from the middle out, and although the fabric in the back still bulged in some places, it wasn't as bad as I had thought. I love the backing fabric, it's so wild and so African safari. I really enjoyed the project and I proved to both myself and my DH that I could in fact finish a project and finish it on time. A few weeks later I happily watched the soon-to-be parents unwrap my quilt and was gratified to hear the assembled friends and family ooh and ahh. After all what better way to know your craft is appreciated.