So life has been crazy. I was just starting to figure out the stay-at-home mom thing when we found out that I may be in the beginning stages of pre-eclampsia at 38 weeks pregnant. And so with a diagnosis of gestational hypertension, I was admitted to the hospital to be induced. Several hours later, which included 2.5 hours of labor and my husband literally catching our child after one push before she fell in the toilet (there was no one in the room with us at the time), and we had a perfect daughter. She's now just over 2 weeks old and my husband goes back to work tomorrow. 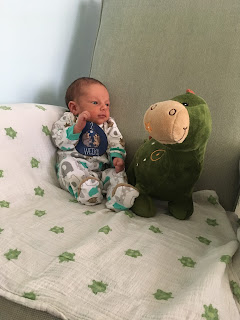 So that's the big news. In smaller news, I have been working on the decluttering challenge at my own pace. It was really difficult in the late stages of pregnancy, because I pretty much had to do the decluttering mentally and then expend as little energy as possible to get up and pull out the stuff I wanted to get rid of. I have continued pulling stuff off bookshelves and other places as I see things that we don't actually need. So while it's not going very quickly, things are moving along. I was able to remove enough books from my bookshelves to move some stuff around and put some of our baby books on a different shelf, where they seem to be existing largely undisturbed so far, while the board books that our son still loves for us to read to him, he has easy access to.

Finally, I tackled the kid's room for my dream house. I knew that I didn't want it any bigger than would fit a bed, a bedside table, a shelf, a desk and chair, and a closet. Since we have two kids, I would just do mirror image rooms for them and they'll look the same. With a good organizer system in the closet, they won't need a dresser either. 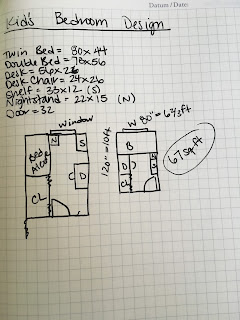 So first I figured out roughly how much space I needed for each item I wanted in the room. Then I started drawing. I wasn't satisfied with the extra space left in the first drawing (left), so I tried again. I think I like the layout of the second drawing (right) and that ends up at roughly 10 feet by 6.66 feet, or a total of 67 square feet per child, 134 square feet for both rooms.

I want the bed to be built in, either as a loft bed, or an alcove bed with storage underneath. I could see the desk, shelving unit and bedside table to be built ins as well, so that there is floor to ceiling storage in every square inch of the room. Not that my kids should need that much space for their stuff, but if they do, they'll have it. Hopefully they'll enjoy reading too, so they'll need some space for their books. One window at the end of the room, the bigger the better to let in lots of light.

So far that brings the total square footage of our house to about 218 square feet.