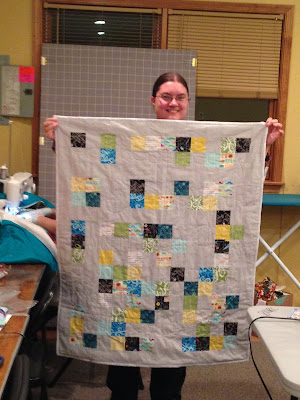 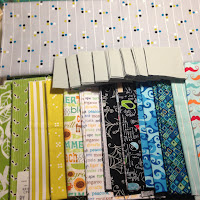 Started with my usual, asking the expecting mother-to-be, one of my friends and coworkers, what the theme of the nursery would be. This is her second, so she said she'd be reusing her first son's alphabet stuff and grey. Great, except I didn't want to do the standard alphabet thing. A quick internet search later brought up Thomas Knauer's Braille Alphabet Quilt-Along and although he hadn't finished the posts at the time, I figured out the pattern and decided on the size of each square based on the fact that I'm lazy and didn't want to piece the back. So I wanted to keep the front under 44" across. That's how I ended up with 3.5" squares, which ends at roughly 42" wide. I found the backing fabric first and then grabbed two fabrics for each color for the front. I cut up the rest of my Kona Ash for the background. 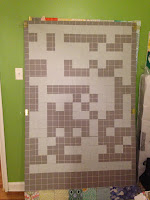 I laid out the background squares first. The braille alphabet works by having six dots in a 2x3 grid, where some will be raised to indicate the letter. So A has a single raised dot in the upper left section, B has a two raised dots in the upper left and the middle left sections, etc. Applying this to the quilt, each "block" is a 2x3 patchwork where the background squares are the smooth sections and the prints are the raised dots. Seems completely random when you first look at it, but when you know what you're looking at, it makes so much more sense. Thus I got a non-obvious ABC theme. After laying out the background squares I then filled in the prints, trying not to get the same color or the same print right next to each other, although I had to put some of them kiddie-corner to each other in the lower portion where the "dots" became more frequent. 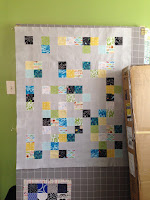 I finished the top of the quilt before I gave birth to my own son in February and then it sat there for a long time. I finally managed to get it basted and then it sat for another long time. In the meantime my friend had had her son, shortly after I had mine. I took it to the DCMQG quilt retreat in November with the intent to finish this quilt, even if I did nothing else (actually it was my second step after finishing my bee blocks). My friend had plans to come to DC for our work all-staff meeting and holiday party, so I wanted to have it done to give to her in person. And I made it. Got it quilted with the cursive uppercase and lowercase ABCs in the corresponding braille letter blocks, and some sort of fun design in the couple "spacer" blocks (I think I did a leaf, a star, a heart, and a swirl). And I got it bound as well. The only problem was that I a) forgot to embroider my initials and the year in the lower right corner like I usually do and b) forgot to take any decent pictures. The only picture I have of the completed quilt is the fuzzy one of me holding it up.

I may have to ask my friend to take a few pictures and send them to me. I really did enjoy giving it to her in person though. Just in case you're wondering, I finished the last of my bee blocks too. :)