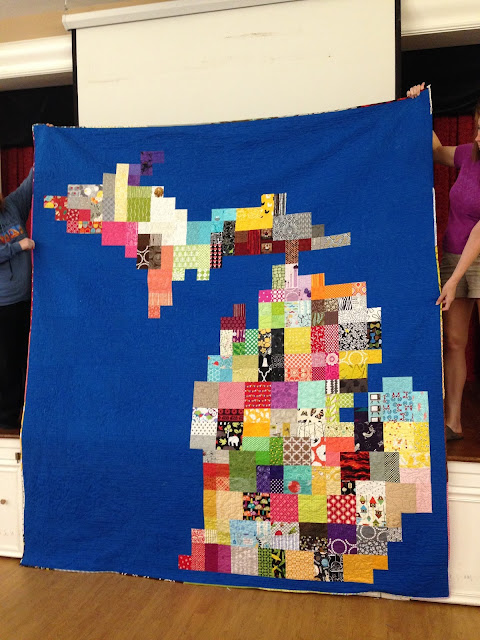 Final Stats
Name: Pixel Michigan
Dimensions: 108"x96"
Pieces: Front - about 346 (my pattern says 346, but I think I combine some of the pieces)
Pattern: My own, inspired by All Roads Lead to Austin by Dana Michaelson
Technique: Patchwork
Materials: 100% Quilting Cottons - Kona Pacific and many prints from my stash
Quilting: Long-armed by Heather S. of Quilts Actually

This journey began a while back when I almost simultaneously saw the All Roads Lead to Austin quilt by Dana Michaelson online and took a free Craftsy class about turning pixelated pictures into quilt patterns. Armed with this, I found a county map of Michigan, where both my husband and I grew up, and got to work in Excel. The spreadsheet is amazing, not only does it tell me how many patches of each color and size I need, but it also calculates your yardage for front and back. And resizes everything when you change the size of the smallest square unit. It took a really long time to set up, but it was so worth it. And the Craftsy class made it really easy to follow along. I dug out my Kona color card and decided that I wanted Kona Pacific as the background color. Luckily I got just enough to cut all of the background pieces. 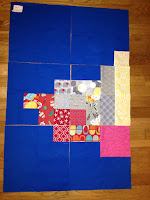 Since I had intended the quilt for my husband, I checked with him to make sure a bit of pink in his quilt wasn't going to freak him out. Luckily he said no, so that gave me an extra color to play with for the counties. I elected to do light blues/aquas but not dark blues because it would have melded too much with the background. I pulled out pretty much every single fabric I had in my stash and organized them by colors that were as similar as possible. Then I went county by county, determined how many different pieces I needed and chose a stack with enough fabric choices. Each of the finished blocks is 12" (12.5" unfinished). I started with the Upper Peninsula and worked my way down. 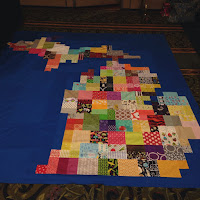 Mid Atlantic Mod 2014 ended with a finished quilt top. I had even contacted two long-arm quilters to get estimates for their suggested way of quilting this beast, since there was no way I was getting this through my machine, much less have a place to baste it. I finally settled on Heather S. of Quilts Actually. And then the quilt sat and sat and sat, because I got pregnant and during the first trimester everything except napping just seemed like too much work. I did finalize with Heather exactly what I wanted for the quilting, down to which thread I thought might look best. And yet nothing spurred me on to cutting the backing fabric and sewing it together. At one point I even contemplated sending Heather the backing fabric and having her put it together. 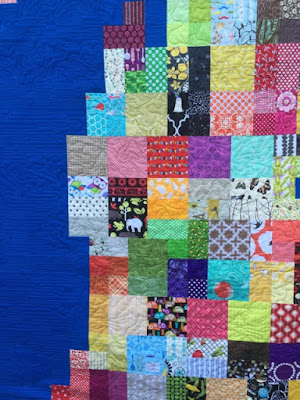 Finally I got an email from Heather that spurred me into action. She was moving and I had until the beginning of May to send her the quilt if I wanted it back by the end of May. Or I'd have to wait until July when she was hoping to be set up again in her new place. So I finally did it, I dug out the blue Bicycle Path and the Bears fabric I had purchased for the back, cut it into 3 yard sections and sewed them together. I didn't even both to iron the seams flat, just stuffed everything in a box and sent it off. Now, I usually hate the basting and quilting process, so quilting by check was incredibly liberating. Heather and I made some adjustments to thread color and then she was off. I got the quilt back in early June, as promised and I couldn't have been happier.
She had quilted waves and fish in the water portions and trees with the occasional deer and bear in the land portions. I had also asked her to put a star over Grand Rapids, where we both grew up, and a bear over Traverse City/Sleeping Bear dunes where we had our honeymoon. She interpreted this to mean the Bears logo, which made neither my husband nor myself in the least unhappy. 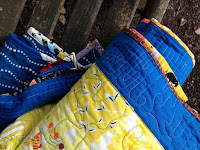 When the quilt came back, all I had to do was trim it, make and sew on the binding. I decided to go with a scrappy binding in "Crayola box order" (i.e. White, Yellow, Orange, Red, Pink, Purple, Blue, Light Green, Dark Green, Brown, Grey, Black) and used only fabrics that I'd used on the front of the quilt. I finished the binding the day after I got it back and elected to machine bind it, because I so wasn't going to hand sew binding on a quilt that size! It even made it onto our bed that very night, after I finally presented my hubby with his very belated birthday/Christmas/birthday present. 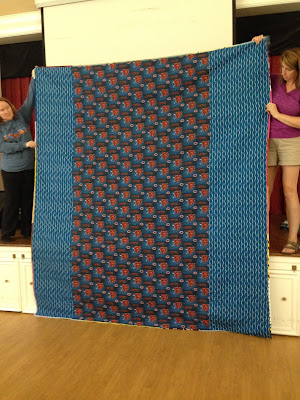 And here are a few more pictures from a little photo shoot I did: 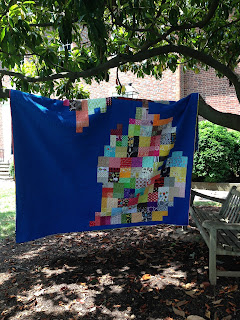 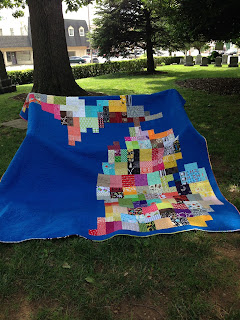