Two posts in one day... crazy. Then again, I'm trying this new things were I spend some time each day in my craft room, and it's been incredibly productive so far.

You saw the first four Giant Churn Dash blocks. I have all of the prints cut and all of the background fabric I had as well. Now I just need to start sewing the blocks together. Unfortunately, I'm going to need to order more background fabric, because I'm short several blocks. 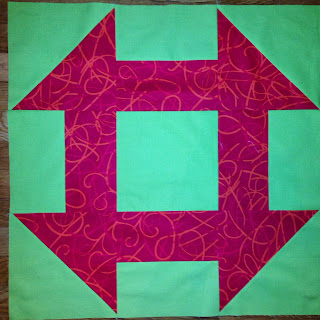 The flash washed this picture out horribly. It's block 5 of 20. And the churn dash is a rather bright red and the background is Kona Sprout.

I have also been working on my Christmas quilt as the leader and ender blocks, but I'm running out of cut Kona Snow, so I'll have to cut some more soon. 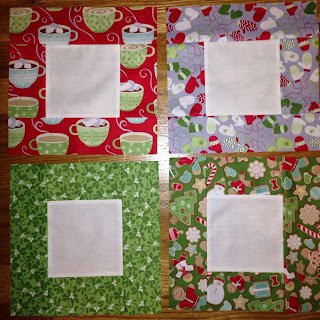 I have more blocks complete, but this is what I've finished in the last few days. The blocks currently measure 9" and will be 8.5" finished. I also have a few with white borders and a print in the center, but I made those a while ago. 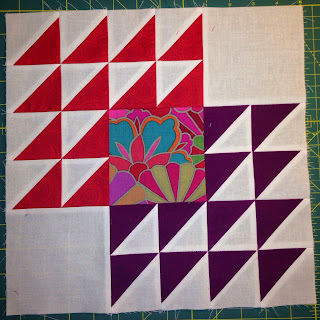 I also finally finished the block for the September Color Bee Shocked queen bee. It took a while, because I didn't want to touch anyone else's fabric while I was sick, and there were a lot of HSTs to square up. Especially since the red fabric didn't want to cooperate. But it's done and it looks good. Almost makes me want to try this slightly larger. I have this obsession currently with huge blocks.
Posted by Anna at 9:24 PM