I have signed up as a quilter for the Sandy Block Drive. Right now they need more people to make blocks, so I haven't been assigned any block makers yet. This is a long-term effort, but once you sign up to make blocks you have about 2-3 weeks to get them finished and ship off to your assigned quilter. My roll of batting shipped, so it should be here well in advance of any blocks I may get, and I am planning on trying out QAYG since I have a major fear of trying to quilt anything that large in one piece on my little home sewing machine.

The other thing I've been thinking about doing is making a quilt for an orphanage. Details can be found here. When I told my husband that I was thinking about making a quilt for charity and that I had signed up as a quilter for the Sandy Block Drive he got mad about the money we'd be spending on charity when we barely have enough for ourselves, etc. I told him that all I need for the Sandy quilt is some batting (which I just bought a full roll of) and some fabric for the backing, no biggie. And that we could afford fabric for a baby quilt, which is what I had planned to make for the orphan quilt.

But that conversation stuck with me. So I took a look at my pre-washed fabric stash, and decided to throw together some log cabin blocks. I already had a few 2" strips, so I decided to cut more. I ended up with pink, yellow, blue and green blocks with different centers. I finished all 12 today and they measure roughly 7 3/4" square. I just need to figure out how I want to put them together now. They'll definitely need a border, I think. I just don't know if I want to do a double border or a wide single border.

Here is my progress (there's 3 identical blocks of each color): 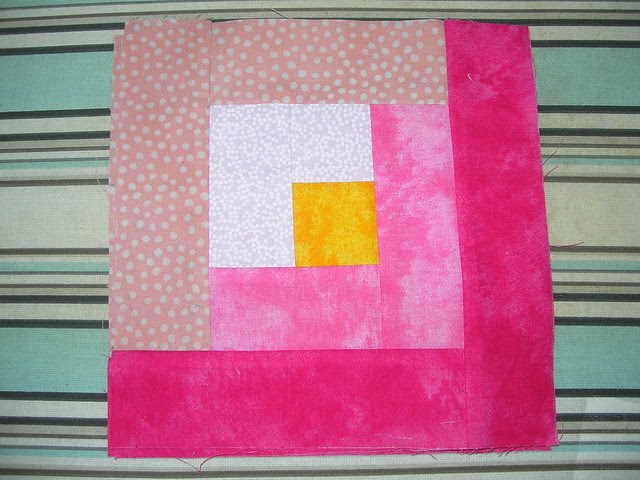 I can't decide if this one is my favorite or the blue one below. 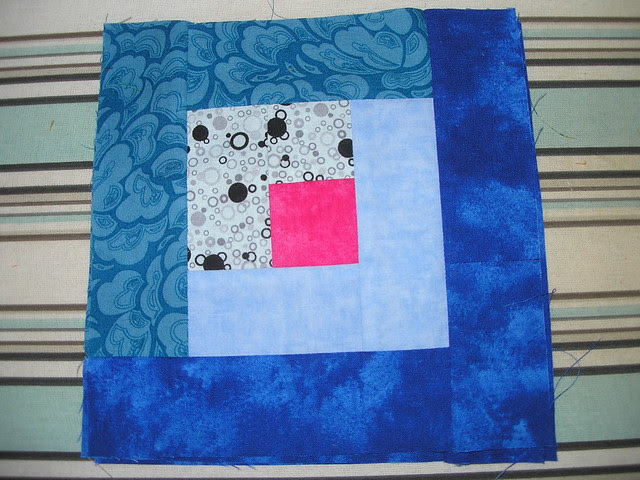 Blue with a pink center. I did two solids and two prints for each block. The light blue print used to be a white before I washed it with the blue batik from the Ocean Life Quilt. Now it's a light blue. Oh well, it's still pretty.﻿ 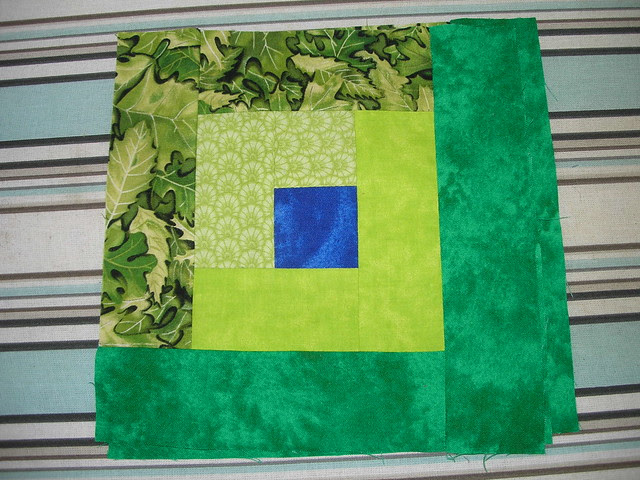 I originally considered using the light blue solid from the blue block, but I like the dark blue better with the light green surrounding it. With the flash, the blue looks a lot more cobalt blue than it really is. 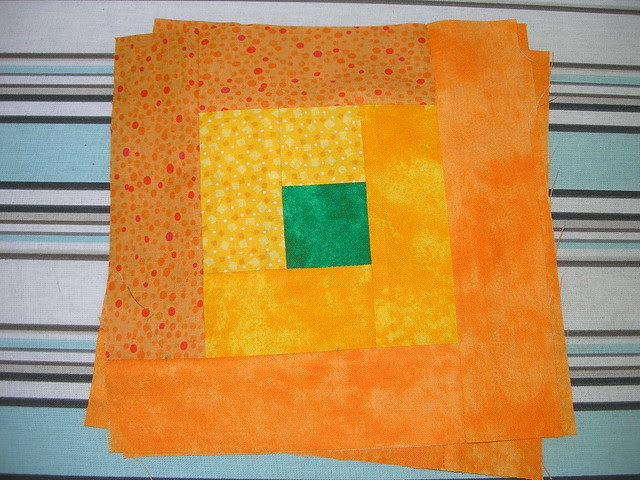 This is my least favorite block. Maybe should have gone with the lighter green solid instead. But I don't want to remake it.

I already know what layout I want to go with, but piecing them together will have to wait until I move my sewing and cutting stuff back to my craft room where I left my square ruler. I'm thinking they'll end up at 7.5" square after trimming and finish at 7" square. I do love seeing all of the different fabrics and remembering what I used them for. That lighter yellow print, for example, was used on one of the giraffes in my very first baby quilt. The leaves in the green block are from my Bug Quilt and the light pink print is from my breast cancer awareness jellyfish for my mother-in-law's Ocean Life Quilt.
Posted by Anna at 12:20 AM