I was updating my Works in Progress page and realized that I have a lot of stuff going on next year.

I'm now signed up for quite a few Bees:

Add-A-Border Block Swap - which moves at whatever pace you feel comfortable. I have made several starter blocks and am actively working on one Round 2 block (it's slow, my first paper piecing pattern, so I don't want to screw it up) and have several Round 2 blocks sitting and waiting for something to happen.

Color Bee Shocked - my month as Queen Bee was in November, but it's a one year commitment with at least one block a month. I have completed the December flying geese blocks which were a lot of fun and the fabric for the January Bento Boxes is sitting on my desk 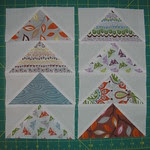 3x6 Mini Bee - I finished the first round's worth of blocks for Quarter 4 and you can hop in and out of this Bee as your schedule requires. I am hoping to sign up for 2013 Quarter 1 and have even been thinking about leading one of the groups. Each quarter is a 6 Block/2.5 month commitment, but once you're done making your blocks and have sent them off, it's just a matter of waiting for everyone else's to arrive. 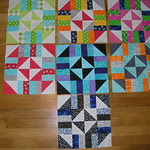 HOPE at do.good Stitches - I was just accepted into the HOPE circle for do.good Stitches. This is a 1-year/2 blocks a month commitment starting in January. It's a great cause and will let me play around with the fabrics I'm slowly accumulating.

Bitty Block Committee - I logged onto Flickr today to find a message waiting for me. I had requested to join the Bitty Block Committee and after being judged by my peers I was deemed acceptable. How cool is that! This one is great because you can jump in and out at any point for a 1-month commitment. They post two themes a month and you can sign up for 12 of one type, 24 of one type, or 12 of each (24 total). The blocks end at 3.5" square, hence the "bitty."

That's it for Bees, although I had considered joining Nubees, where you sign up to make 5 blocks every month. Looking at my current list, maybe that plan will have to fall by the wayside for a bit.

I also signed up as a quilter for the Hurricane Sandy Block Drive hosted by Michele at the Quilting Gallery. I have received my first stack of blocks and plan to do QAYG to put the quilt together.

In addition, I have started a baby quilt for a Charity Drive hosted by Pigtales and Quilts. I have all of the scrappy log cabin blocks done and have even sewed on a solid purple border. But I want to do a second scrappy border and then of course it needs to be quilted and bound.

I am also working on various other projects, both quilting and others, including two baby quilts with two more planned. I'm clearly crazy! But I love it.
Posted by Anna at 10:48 AM