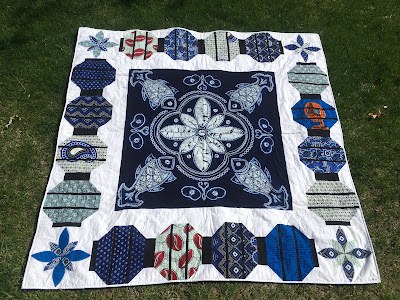 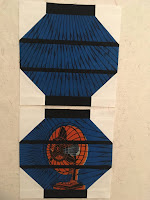 Same story as African Commission #1, which you can read about here. I convinced her that she should give me free reign on design for the second quilt. It was inspired by the center panel that she had purchased in Asia (I think China, but I don't recall exactly). The lanterns are based off of several Chinese lantern patterns I've seen online over the years. I put the rough dimensions I wanted into EQ7 and adjusted until I was happy with the overall effect. For the corner applique blocks, I was inspired by the center of the panel and created templates for the petals. I sorted out all the blue and white fabrics and used only those from what she had sent me. The lanterns are paper pieced, and I did roughly 2-3 from each of the fabrics. The fabrics that had some variety in the design were great, because they allowed me to use different parts of the fabric to create different lantern designs. 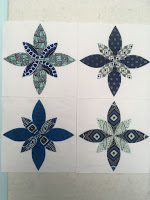 The corner blocks are rough-edge applique with thin iron-on interfacing and a straight-stitch to tack them down. I used paper templates to trace onto the iron-on interfacing, and then used that to cut my pieces out of the fabrics. The center is just a center that I cut to the size I wanted, framed it in a plain white border and then my lantern and corner blocks. I was really happy with how the top came out, I have to say. The back was just four pieces of leftover fabric, the tighter weaves, that I pieced together into something resembling a flat, squarish piece. The client and I had talked about doing a yarn-tied quilt for this one, because I was having a lot of trouble wrapping my brain around how to machine quilt this, especially with the big center panel. I didn't want to do anything that would detract from that stitching, and I usually quilt in white, so it would have shown very clearly on the dark blue background. 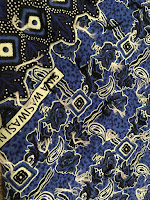 I ended up buying a doll needle, which is super long and when I asked the sales clerk, she just looked at me funny for a minute, until we went over where the needles are and there was in fact one called just that. My first attempt was to do the hidden stitching, but between the thickness of the appliqued blocks, the thickness of the yarn I was using, and several other issues, which all boiled down to it being supremely difficult to get the needle through the quilt sandwich, I finally gave up on that. So I did the double-loop with a knot on the back of the quilt, so the front would be flat and the quilting would be nearly hidden. To that end, I also used black and white yarn very strategically so it wouldn't show quite so much. I really liked the overall effect, but it was sooooo time consuming and really hard on my fingers even with bandages and all sorts of other things that I tried to make it easier to pull the needle through. 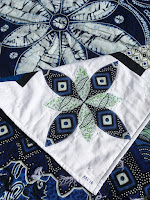 I really hope the quilting stands up to multiple washing, although the client indicated that she might use it as a wall hanging. In which case, it really doesn't matter. After trimming it to size, I just did an all white binding, so it would blend and let the rest of the quilt design shine. Usually I like darker bindings to put a frame around the finished quilt, but I really like the effect of invisible edges on this one. Some embroidery finished it off, and after my usual photo shoot, it went in a box and was sent to Washington, DC over a year later than anticipated. Luckily the client loved both quilts and seemed fine with the delay. I was pretty proud of myself for finishing it up as well, finally! Though I did promise myself no more commissions for a while, because it seriously depressed my sewing mojo for a long time. Having projects you have to complete that you're not incredibly passionate about is hard. Made harder when you guilt yourself into only working on that project until it's totally done. The result: nothing gets done. Lesson learned (maybe). 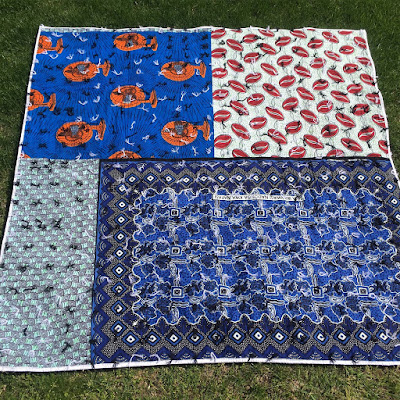