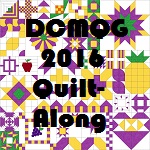 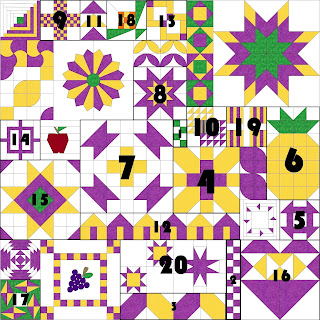 We are moving on to wonky (improv) stars. Both 3x3 grid and 5x5 grid. No specific inspiration for these. I'll show you how I created my layout and encourage you to create your own, otherwise you can just follow my cutting instructions.

Drawing Your Layout
Our blocks are going to be 16.5"x16.5" (8.5"x8.5") square and we're making two of them. One with the 3x3 grid stars and one with the 5x5 grid stars. Ignore the 1/2" seam allowance when drawing out your block and add it back in for each piece you cut later.
On graph paper draw out two 16x16 (8x8) grids, where each square is 1" square, or two 32x32 (16x16) grids where every square is .5" square. Write 3x3 under one grid and 5x5 under the other so you don't forget. Start with the 3x3 grid and draw out a section in a multiple of 3 (in the image below, I used 9x9 in the upper right corner), subdivide this section into 9 squares, with the center square being the center of you star, then draw points around it. Continue filling in your grid until you like your star placement. Also notice that in my 3x3 grid below I would have been better off using a 32x32 grid, since I ended up with half inch sections. 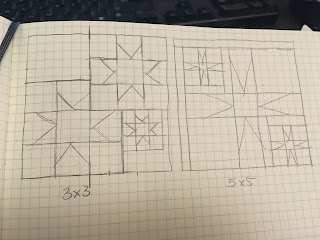 Do the same with the 5x5 grid, find a multiple of 5 and draw your starting square. Draw lines through the square at 2/5 and 3/5 of the distance, so the points are twice as long as the center square. then continue filling in stars in multiples of 5 as you see fit.
Once you are satisfied with the general placement, go ahead and erase as many of the section lines as possible, extending the squares with your star points to the edge if possible, making sure you have some very clear lines that go all the way through your block. I have extended this line out all the way to the edge in the 3x3 block above. 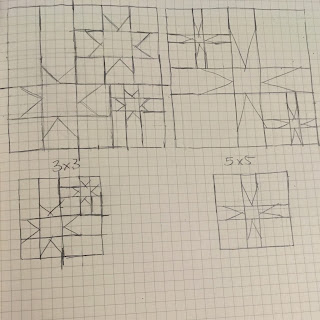 Now look at each block you've drawn up and count squares. I labeled each star center with a letter and each background piece (ignoring the star points) with a number. If sizes repeated, I labeled it with the same letter or number to come up with my cutting list. Write out the finished size first and then add .5" to each width and length. And also put the number of pieces you need in each size next to the size, so you can check them off as you're cutting. Add 4 squares of each 3x3 grid star fabric to your list, roughly .5" larger on both sides than your star center. For the 5x5 grid, make this about .5" larger on one side and about double on the other. 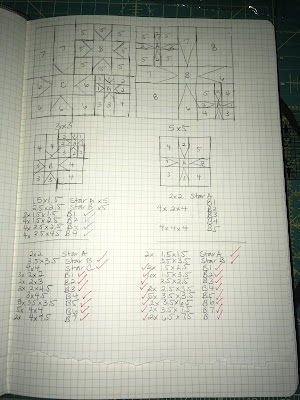 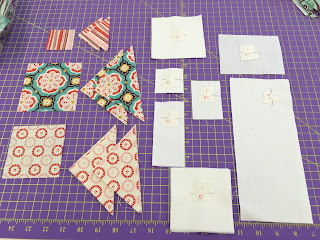 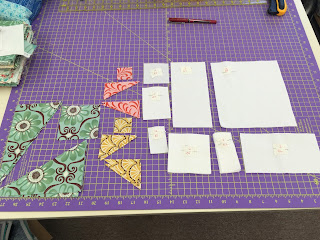 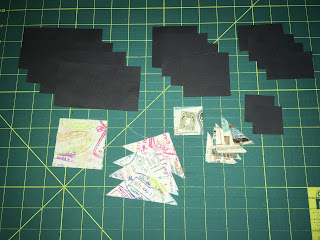 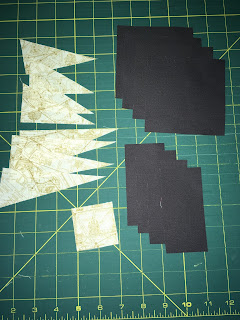 Please note for Part 2, I oversized the block and then trimmed it down later, just in case the math doesn't quite make sense.
Piecing Instructions
Lay out all your background and star center pieces to make sure you have them all in the right place. Refer to your drawing frequently. 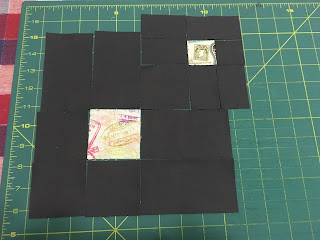 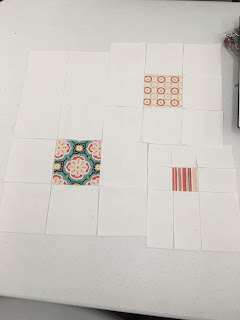 Next lay out all your star points on the corresponding pieces. Be very careful when you cut the rectangles that you cut half along one diagonal and half along the other (I do this by separating them into two stacks and then cutting from the top left to bottom right on one stack and from bottom left to top right on the other half). 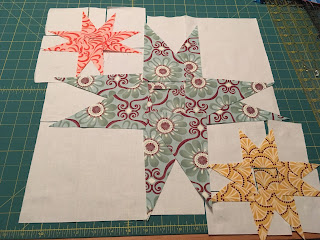 You can do the points for each star separately or take them all to your machine at the same time. Just remember which points go with which background piece and which side they need to be attached to. Take a background piece and one star point and decide how you want to position the point on the background, then flip it so the pieces are right sides together and sew a quarter inch seam along the edge of the point. Test to make sure your point covers all of the background fabric, by flipping the sewn piece to the front. Attach one point to each background piece. Do not trim until you know they are right. 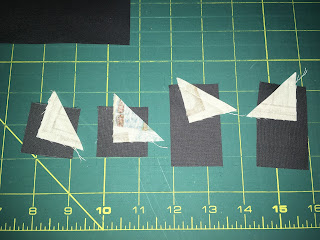 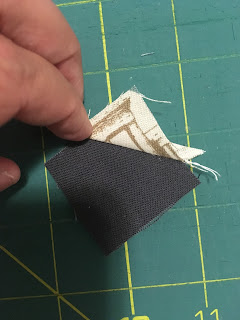 Once you have attached the first point, trim a quarter inch from the seam and press the seam. I highly recommend pressing these open to eliminate bulk. Now attach the second point to each piece. Test, trim, and press. 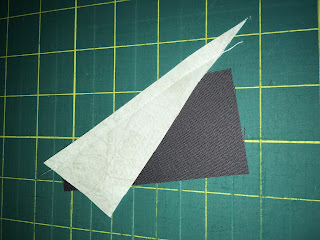 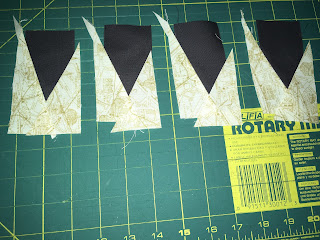 Now trim each piece back down to the starting background size, refer to your drawing frequently while doing so. It also helps to place your points where they go in your block and cut one piece at a time. Start with the largest pieces and work your way down. That way you hopefully won't accidentally cut a large piece too small. 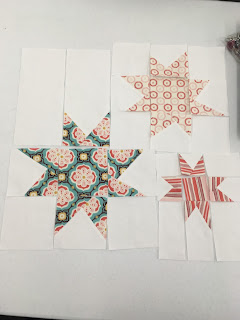 Finally assemble the block. Figure out your game plan before you start sewing! Remember where your line through the block is to avoid any T-seams. In the block above, I assembled the medium star and the small star entirely. Then joined the left six sections of the big star together into one panel and the right two sections into one smaller piece. Added the small section of the larger star to the smallest star, joined that section to the medium star, and then sewed the straight seam to complete the block. 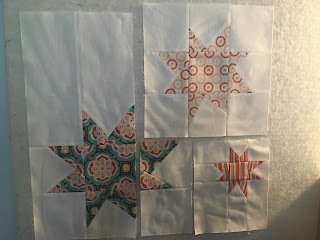 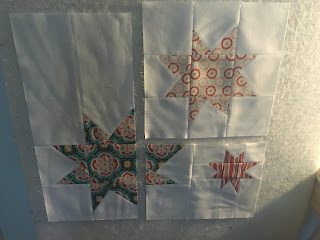 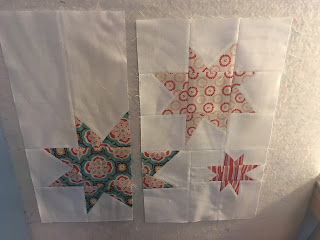 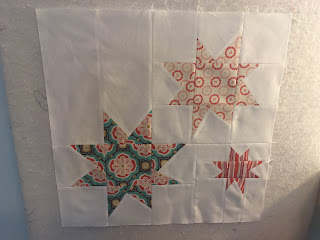 If you are making the 5x5 grid star for the baby quilt, I made the star and then trimmed it down to 8.5" square, centering the 4.25" point of the ruler roughly in the center. Make sure when sewing your points, not to go all the way to the edge of the background piece so you don't lose your points when trimming. 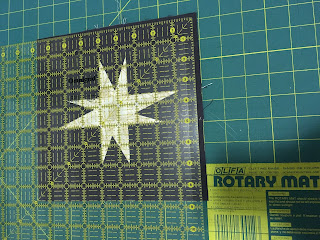 Once you have parts 1 and 2 assembled, sew them together. Here is the complete queen sized version: 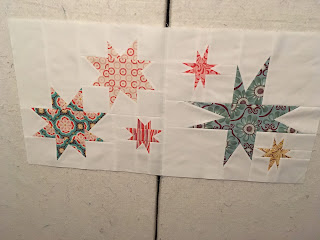 And here is the baby quilt version: 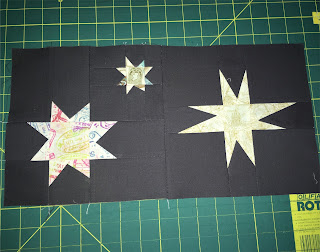 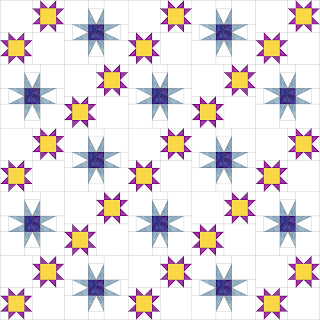