I can't believe I haven't posted anything in two months. I promise, I'm still alive. Just super busy. I started back to work last Wednesday and before that I was trying to cram as much sewing and baby time as possible into every minute. So I've got lots of stuff to share and don't even know where to start. Well, baby pictures are always good. 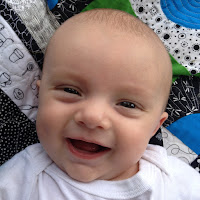 Let's see, the Hexie quilt has been set aside. I've sewn together about 12 out of 25 rows, but wasn't even close to finishing it in time for the wedding. So, since I have a ton of other things I need to get done with upcoming deadlines, I figured I'd set that aside and work on other stuff. I have 3 of these panels stitched together. 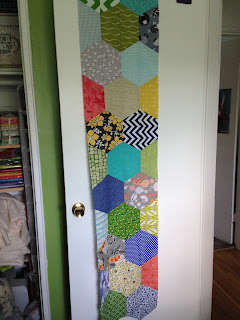 Then I decided that I should join the DCMQG Bee. Lynne had the first month and I'm queen bee for the second. Here are the blocks I made for her: 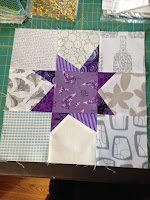 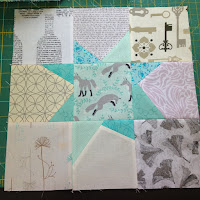 She wanted aqua and purple wonky stars with low volume backgrounds. I think I did alright, although aqua is one of those colors that completely frustrates me.

And here is the block I chose for my month. I made two test blocks and they were way more fun than I thought they would be since I don't usually do scrappy improv: 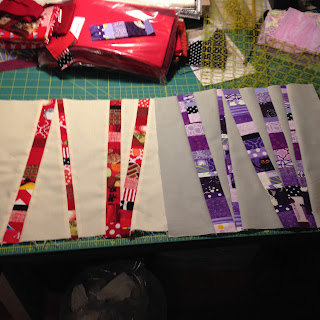 They will become a baby quilt for my nephew Jackson, who is due in August. That's the great thing about having two siblings who are 15 months and 3 years younger, we all end up with babies at roughly the same time (the same year). In this case, three boys who have already been dubbed the Three Musketeers.

Next up we have a whale baby quilt, using the Preppy the Whale pattern from Elizabeth Hartman. I bought the pattern and it made the quilty math so much easier because I had actual measurements for each piece to base it off of, not just eyeballing a design. First I blew up the whale times two, then I chopped the pattern into 4" (finished) sections. There was much scribbling on scrap paper before I was satisfied and I'm happy to say that it worked out. 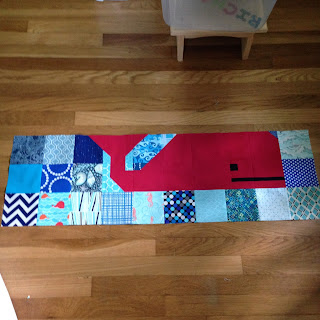 I also pieced a back, basted, quilted and started making binding for it. But ended up stuck because I didn't have enough red solid to make the binding and the red and white striped binding I had leftover from another quilt also isn't enough. Unfortunately, since we're on a super tight budget until I get paid again, I have been unable to buy more. Hopefully it will get done soon though and I can write a post just about that quilt, because I think it's turning out fabulously! It's for the son of our friends, Kevin and Jess.

I also basted the braille alphabet quilt for the son of a coworker.

I'm extremely happy to say that I received the Pixel Michigan quilt back from the longarmer and didn't waste any time making scrappy binding for it and finishing it off. It's been hanging out on our bed since I presented it to my husband for his long overdue birthday, Christmas, birthday present. Here is a sneak peek, as I'll be making an entire post for that finish as well. It more than deserves it. 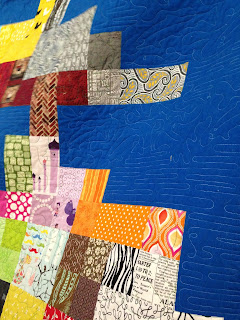 I am once again working on the wedding quilt for my brother-in-law and his fiancée. I'm making a Scrappy Swoon quilt, just a bit bigger than the original, so it fits a queen sized bed. Here's where I am with that, I just have to sew this layer together and onto the center and then have one more layer to go: 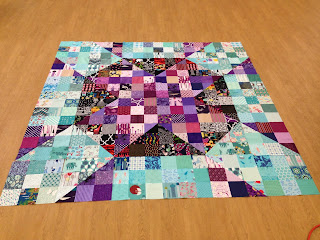 Although I think the greenish blues really stand out, the purple and the black blend together a little more than I would have liked. You can barely see that the center is supposed to be a star and not an X. But I like it anyway.

I've also done some work on the Layer Cake Sampler QAL and have paired one Sunnyside print with one white solid and drawn the lines on the back. I've even sewn up several of the pairs, cut some apart, and even managed to finish my first block: 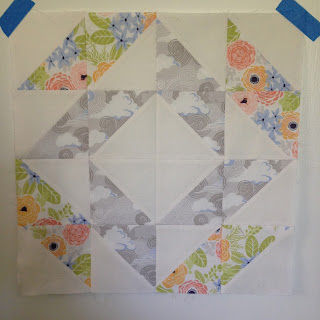 I quite like how this first one turned out, we'll see what happens with the rest.

I've also put in some work on my cross-stitch pieces, but mainly on the piece I started most recently. Forest by Satsuma Street. It is coming together much faster than I thought possible, although I haven't had a chance recently to work on it. 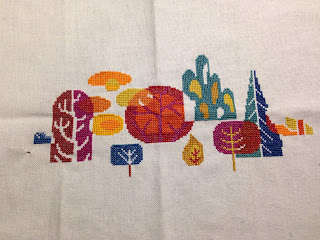 I'm making it to go along with the baby quilt for my nephew. My sister-in-law said that she had a pillow that needed a cover, so that's the plan. Not sure how I'm going to "frame" it, but I'm thinking maybe a scrappy border to match the quilt for the front and then an envelope back that doesn't require a zipper.

Phew, that was a longer post than anticipated, but I really have been quite busy. And that's not including the guild meetings and the Denyse Schmidt lecture I attended. Maybe I'll post something about those some other time.
Posted by Anna at 10:57 PM