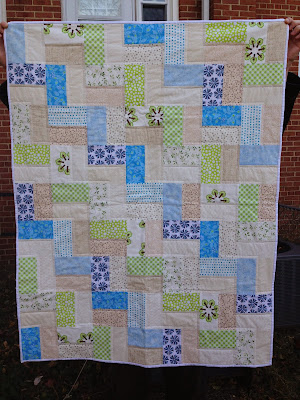 Final Stats
Name: Low Volume Baby Quilt
Dimensions: 35x45 Inches
Pieces: Front - 126
Pattern: Simple Split Rail
Technique: Patchwork
Materials: 100% Quilting Cottons
Quilting: Machine quilting done on my little Euro-Pro
This quilt is for a coworker whose baby is due middle or end of December. For some reason I thought it was beginning of December, so when I had extra time the weekend before Thanksgiving, I finished it up real quick. 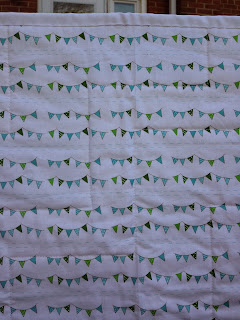 The only direction I got from my coworker was the following: 1) they wanted to keep it gender neutral even though they knew they were having a little girl (which I'm totally cool with) and 2) the nursery walls are beige and she didn't want anything too bold, because she wanted the nursery to be very soothing (to each their own, I guess). That wasn't a whole lot to go on, so I decided to do low volume. But being me, I just couldn't resist throwing in one or two slightly bolder fabrics.
The top is a simple two patch split rail pattern, with the stair steps in alternating blue and green, with neutral creams and whites in between. I outline quilted it on both sides of the blue and green steps at about 1/2 an inch from the seam. The backing is a Riley Blake fabric and the binding is Kona White. I was going to add an applique sea turtle to the front, but decided to leave it as is. I embroidered my initials in the corner on the subway ride into the city to drop it off.
My coworker loved it, and said it matches her nursery perfectly. Mission accomplished. :) 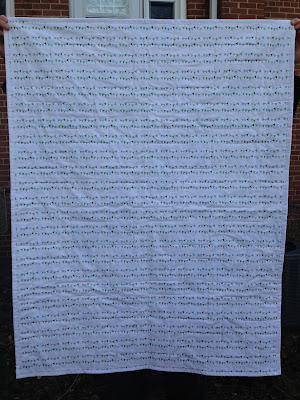