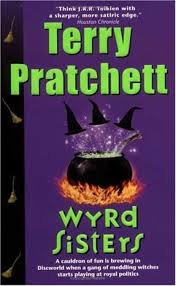 I just finished reading [make that devoured] Wyrd Sisters by Terry Pratchett. If you're into satire, fantasy, or "That Scottish Play" [yes, I'm a theater geek, what of it] you might like this book too. Basic plotline: King gets assassinated, evil duke takes over throne, three witches try to make things right again. Enter playwriting dwarves, someone so crazy he's sane, a Fool who hates being a Fool, and Pratchett's trademark hilarity and you get a pretty epic story.

For everyone who has not made any forays into Pratchett's Diskworld series, you're in for a treat. The whole premise of his series is that there is a flat world on the back of four elephants which in turn are standing on the back of a giant turtle floating through space. There is of course plenty of magic, many unlikely heroes, a benevolent tyrant, a city watch made up of persons dead and alive, and other antics. I highly suggest any one of his books.
Posted by Anna at 2:25 AM