Day 23 → Something you wish you had done in your life.

I wish I had taken better advantage of my semester abroad at the University of Limerick in Ireland. I was so focused on keeping my grades up, dealing with a different grading and testing system, not having actual books for most of my classes, etc. that I didn't use my time to travel a whole lot. In the end, it didn't matter at all, because the different grade point conventions between U. of Limerick and American University meant that I ended up with lower grades than I should have for the semester. At of U of L they use .2 to signify a + to the grade (so a B+ would be a 3.2), but at AU they use .3 to signify a + (so a B+ would be a 3.3). And since they didn't bother looking at my letter grades (which is what the teachers gave out, which UofL then translated into the grade points for the transcript) my two B+'s turned into B's. Long story short, I got screwed over and if I had known that to begin with, I probably wouldn't have bothered trying so hard for the B+ when at the end of the day it was going to translate into a B anyway. 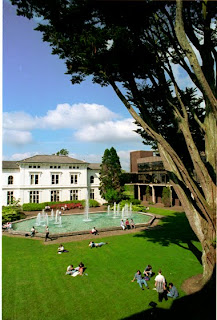 So, there were two options for housing arrangements. We could either choose to live with Irish students or with other international students. The co-ed apartment style dorms (individual rooms with bathrooms but with a co-ed living room and kitchen) that had only international students in it, had groups going out almost every weekend to Cork, Galway, the Aran Islands, etc. And some of the international students living with all Irish students would get to go home with their dorm mates on the weekends and see parts of Ireland that way. Oh yeah, Irish students go out almost every night of the week to pubs and clubs, etc. and on the weekends they go home to their parents where most of them have jobs to pay for their party time during the week. Unfortunately, I didn't get close to my Irish room mates. They asked me to go out with them the first few weeks, and I would have loved to, but I had absolutely no money due to an unfortunate extra technology fee that my parents didn't pay in advance. So I had to open a bank account and have my grandmother wire me funds from my German account, but that takes a while (2-3 weeks). So until then, I was completely broke.
So on the weekends, I mostly studied or talked for hours with my then boyfriend. My DH and I had just started dating at that point. But by the time I finally had money, my room mates weren't interested in trying to be friendly anymore and stopped asking me if I wanted to do anything. As for the other international students, I made friends with a few of them, but for the most part they stuck to their own room mates, especially if they were in one of the international student dorms. I wasn't really up for traveling on my own either. And anything outside of Ireland, required a longer period to make it worth it, but because the semester doesn't start until February, they also don't have a lot of vacation days in spring. In fact, the only time we did get was a day or two around Easter and about two study days before exams. Easter I used to meet a friend from high school in Scotland (that was a lot of fun) and the study days I used to go to Venice, Italy with my two friends from UofL. I also took a weekend trip to London to meet up with the same high school friend, and I went on the international student trips to Dublin and then to the West coast of Ireland. All of those trips were a ton of fun, but I wish there had been more.
Hopefully DH and I will be able to go back there one of these days and take care of that regret. We'd talked about it as a possible honeymoon destination, but neither of us could face the long flight right after driving to Michigan (10 hours) and spending a week pulling together our wedding reception. Maybe next year though.
Posted by Anna at 2:07 PM